Wadsworth, OH — Renacci for Ohio announced it will be running a new television spot this Sunday during the Cleveland Browns and Cincinnati Bengals football game. The ad will be broadcast in the Cleveland and Cincinnati media markets, and will highlight the dismal failure of Mike DeWine’s time as governor, which has led to unprecedented misery for Ohioans. 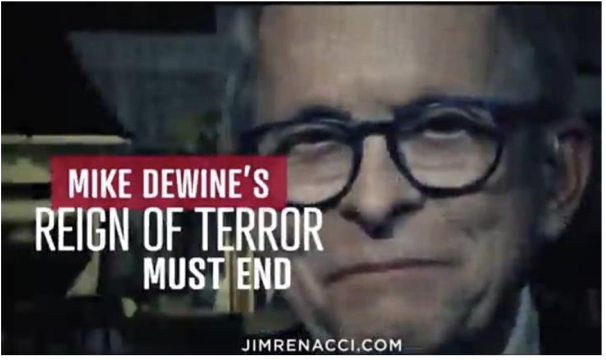 “Mike DeWine has proven he is unfit to be governor,” Jim Renacci said. “His reign of terror has directly led to less personal freedoms due to his COVID mandates, illegal immigrants flooding into our communities, and the indoctrination of our children with Critical Race Theory. Ohio needs a strong conservative leader who will fight for American values and protect Ohio’s future. We cannot have a strong America without a strong Ohio, and when I’m governor I will always put the people of Ohio first.”

DeWine’s reign of terror must end.

This is Jim Renacci and I’m running for governor because we need to stop Mike DeWine from dragging Ohio down the gutter.

DeWine’s mask and vaccine mandates, not on my watch.

I’m running for governor because I’m worried about our children and grandchildren’s future.

I’m Jim Renacci, candidate for governor, and I approve this message.