Cleveland, OH –  A stunning report from the Cincinnati Enquirer provides additional details to the HB6 pay-for-pay scandal embroiling Mike DeWine and FirstEnergy Solutions. In 2018 and bankrupt at the time, FirstEnergy Solutions funneled $500,000 to the Republican Governors Association in order to help DeWine win his election. However, they did not disclose their large dollar donation to the federal bankruptcy court which would have obviously sounded the alarm on any potential conflicts of interest. DeWine ultimately signed HB6 which would have provided the company with a large enough bailout that would have likely helped them out of bankruptcy.

“As the walls close in on him, Mike DeWine still has not come clean about how much dirty money he took from FirstEnergy and their subsidiaries,” Jim Renacci said. “More details show the shadowy operation to disguise and conceal the millions of dollars flowing from dark money groups to help DeWine and, if we don’t get answers soon, who knows how much corruption will happen in 2022. Ohio taxpayers have suffered enough from this DeWine scandal, and these funds must be returned to the company to be credited back to hard working Ohioans so they can get the relief they need.” 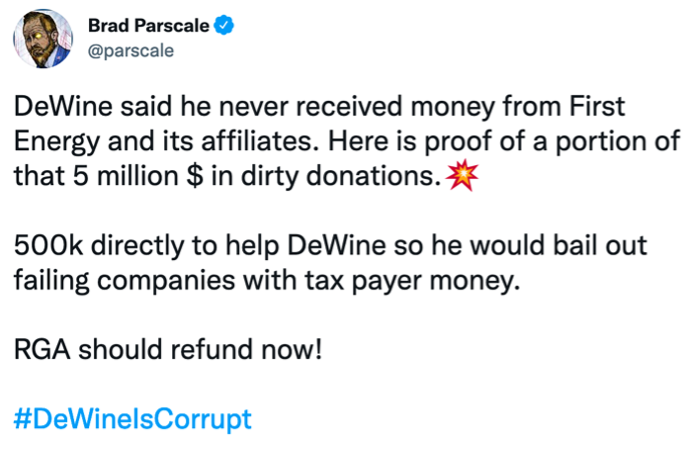 “Bankrupt and struggling for survival, FirstEnergy Solutions donated $500,000 to the Republican Governors Association in October 2018 as part of political strategy recommended by Akin Gump Strauss Hauer & Feld, a powerful law firm with offices around the world.

“But the contribution – designed to help Republican Mike DeWine – didn't get prior approval from the federal bankruptcy court.”

“Still, FirstEnergy and FirstEnergy Solutions, which is now called Energy Harbor, have not provided a full disclosure of how much money it pumped into Ohio politics via dark money groups.”

Jim Renacci has continued to seek answers on how much dirty money DeWine has received from FirstEnergy and called for the Ohio Attorney General to investigate. In an op-ed for the Columbus Dispatch, Renacci wrote:

“Ohioans are fed up with these pay-to-play scandals. And it is long past time that DeWine came clean about his involvement with them. Step one is for him to return these apparently tainted donations.”

“FirstEnergy Corp. has agreed to pay a $230 million fine for its central role in a bribery scheme — the goal of which was to get legislation passed that included a $1 billion bailout for two of its power plants in Ohio.